Early Childhood Caries: Common Symptoms & How To Prevent It

HomeMy Tips and BlogsEarly Childhood Caries: Common Symptoms & How To Prevent It 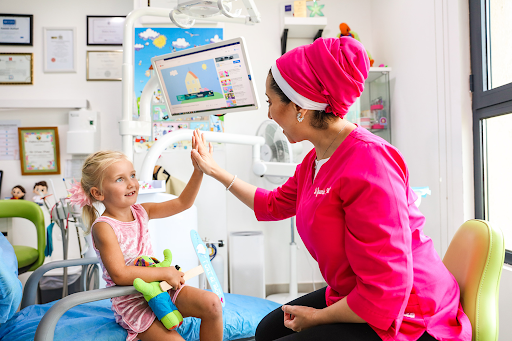 Dental caries is one of the few diseases that people are susceptible to throughout their lives. While dental caries can start at any age, it’s more commonly seen in children and teenagers. Sometimes early childhood caries or ECC is seen in young children who are at high risk for contracting the disease.

This is why parents should know how dental decay starts young, learn about its symptoms and risk factors and know the best prevention methods. Talking to your pediatric dentist in Dubai will help you get a better understanding of this disease and ensure that your little ones have strong and healthy teeth from babyhood onwards, which is crucial for their long-term well-being.

Here is what you need to know about ECC-

According to the studies by the American Academy of Pediatric Dentistry (AAPD), infants exposed to decay -causing bacteria called mutans streptococci are the ones who are found to be at a higher risk of developing the condition. It’s found that this bacteria often reaches the baby’s mouth from his mother’s or his caregivers during infancy. The bacteria can be passed on to babies whose milk teeth are yet to come.

With that said, bacteria alone is not enough to cause ECC. Babies who feed throughout the night and those who are introduced to a surgery diet on starting solids are at increased risk of ECC.

As the streptococcus mutans can break down sugars, they can easily thrive in a baby’s mouth even when he is on an all-milk diet during his earliest days. As the child’s tooth eruption starts, the bacteria may form a permanent colony inside the child’s mouth  as it gets a stable surface for attachment.

The bacteria essentially break down the sugars in milk and early solids for energy, creating an acidic environment in the mouth. This leads to erosion or demineralization of the baby’s enamel, causing ECC.

ECC has a notable pattern when it affects children between the ages of 12 and 30 months, which is different from that in older children. When a baby develops EEC, parents often find that the first teeth exposed to the acidic environment created by the bacteria in the little one’s mouth are generally the first ones to show signs of caries. Therefore ECC develop lesions on their upper front teeth most of the time, as these are the first teeth that your baby gets. These include the central and lateral incisors and canines. If a child who is at high risk for ECC had a slightly different tooth eruption pattern, caries may accordingly affect the teeth that came first.

Children who fall under a moderate risk of developing ECC show the first signs at a later age. In this case, the decay affects the molars. Your kid’s dentist in Dubai will note the caries activity in the upper front primary teeth and molar surfaces that are exposed to confirm a caries diagnosis.

If you notice lesions on your baby’s newly erupted teeth, it could be a sign of ECC. Here are a few other symptoms and risk factors you should know-

The common symptoms of ECC include-

1. White spot lesions on the upper primary incisors, particularly along the gum line

2. The slower growth rate in infants with caries

3. Young children may also experience some pain and show an aversion to eating

4. Older children who can verbally communicate may complain of sensitivity toward cold food

As mentioned before, one of the most common risk factors for ECC is early exposure to caries-causing bacteria, which the baby gets directly from his mother or other primary caretakers. According to AAPD, the other risk factors include-

3. Presence of invisible plaque on the child’s upper front teeth

Other factors such as lack of good oral habits, increased intake of dietary sugars, and fluoride deficiency may contribute to early caries and  are considered as risk factors together with prolonged bottle feeding at night.

To effectively prevent ECC, parents must educate themselves right from the time of pregnancy. Understanding dental  decay is vital for expecting parents, especially if they have suffered from the disease at any point in their life and have already been exposed to caries-causing bacteria.

You can start by consulting with the best dentist for kids in Dubai, Dr. Yasmin Kottait, and discuss your concerns regarding early oral development and caries prevention. The AAPD generally recommends taking children for their first dental appointment as soon as their first tooth comes or around the time of their first birthday, whichever comes first. If your little one is at moderate or high risk of developing EEC, it’s advised that you visit your nearest pediatric dentist at the earliest for decay  screening and start on preventive therapy like cleaning and fluoride.

Additionally, it is important to follow good oral hygiene practices at home and be mindful of your child’s sugar intake. Both parents and children should practice these measures so that the family as a whole can combat decay and stay strong every day.

To know more, reach out to our kid’s dentist in Dubai and book your appointment today.

My Tips and Blogs