What Causes Late Teething In Babies? 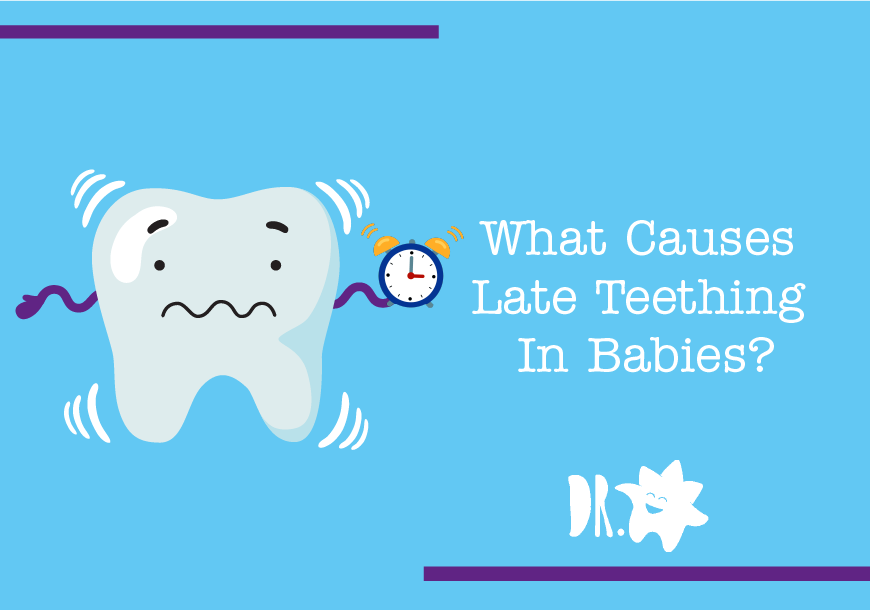 Teething occurs when a baby’s ‘milk teeth’ start to break through their gums and into the jaw, making them available for chewing, eating, and biting things. But what if the teeth don’t come through at the right time? Why are some babies late in their teething and others aren’t? And why do some babies always seem to sleep, fuss and cry every time a new tooth emerges, no matter how old it is?

There are several reasons why some babies’ teeth may take longer to appear and we are going to discuss them all in this post.

When Do Baby Teeth Typically Erupt?

In most cases, baby teeth will erupt around six months of age. Some, however, may erupt as late as 18 months or even later.

It is considered atypical when a tooth is not visible by 6 years. Teeth can emerge any time after six years, but for a child to have no teeth beyond that is unusual. A medical assessment and perhaps x-rays will be required in such cases to determine whether there is any abnormality present.

What Causes Late Teething In Babies?

Here are a few of the reasons behind the late teething in babies:

A child born prematurely or with low birth weight is at higher risk of delayed tooth eruption.  This is due to the very low stimulation that the baby gets from the mother. This leads to delayed speech and delays in motor development. These children are also more likely to be smaller than normal, so teeth will take longer to erupt.

An unhealthy diet can have a negative effect on the child’s overall health and development, making them more susceptible to other disorders and conditions. This will cause the body to divert energy into healing other affected areas and delay the teething stage.

Some parents report having a late teether in their family. And the pattern is that some children take longer than others to begin teething.

Several developmental disorders can cause children to have delayed teething, such as Down’s syndrome, Williams syndrome, autism, and cerebral palsy.

Some medications and natural remedies can delay the eruption of baby teeth. For example, anti-seizure drugs, antihistamines, and blood pressure medications can slow saliva production, which is required for teeth to emerge.

Nonsteroidal anti-inflammatory drugs (NSAIDs,) such as ibuprofen or naproxen sodium (Aleve and others), can slow tooth development.

These medications are commonly used to treat pain and fever in teething children.

Antibiotics: The prolonged use of antibiotics may delay tooth eruption. The length of time depends on the type of antibiotic used, its dosage, and duration. Although, it is generally a temporary effect and can be reversed when the drug is discontinued.

Steroids: Applying steroids to the gums can delay tooth eruption, as can other medicines taken in larger amounts.

Failure in the endocrine glands can affect the baby’s growth and development, including delays in tooth eruption. For example, failure with the thyroid gland may cause a child to present with delayed tooth eruption.

What To Do If Your Child Teething Is Late?

According to doctors, children should be checked at least once every four months, after five months of age. A dentist or pediatrician should do this.

When your child is sleepy, try and wake them up to ensure that they are not suffering from a lack of oxygen to the brain. Also, if you start taking them for naps every 1-2 hours, it will help with their sleep patterns.

Children love to suck on dummies, especially after a nap. If your child needs a dummy, it may be an effective method to get them teething again at the earliest possible time.

3- Give your child extra love and attention

Children who feel loved and wanted tend to be healthier, happier, and express themselves more. This helps them develop a sense of trust with their parents and family, which will lead to the child being able to express their needs effectively.

4- Massage areas of the gum

Massaging the gums of a teething baby is not only soothing but can physically stimulate the mouth. This may help your baby get teeth back on track at an earlier time.

Parents need to know that late teething is not uncommon. From lack of stimulation resulting from prematurity to medication, genetics, and development disorders, your baby can still be healthy, happy, and having fun throughout their life. So, if you notice late teething in babies, get in touch with Dr. Yasmin by booking an appointment now!